The Adventures of Taco Crotch

I am a senior in high school and there’s a girl that goes to my school, we’ll call her “Tammy.” She thinks she’s all that and a bowl of Middleswarth BBQ potato chips and let me tell you, she’s not. She got a brand new yellow camaro, (Think Bumble Bee from the Transformers) and the only reason any boy will pay any attention to her is to drive it.

She will blow or fuck any guy. I mean anybody. I don’t know if it’s true or not, but someone told me that she fucked the two special needs boys that are in the 10th grade. She must have pretty low self-esteem to be so loose like that. The boys don’t care, they get to drive a hot car AND they’re getting their rocks off. I just think she shouldn’t try so hard and maybe people would like her.

She’s not very attractive, but she thinks she is. She wears far too revealing clothes and most of the time they don’t even fit. It looks like she’s stuffing 10 lbs of shit into a 5 lb bag. She could really use a lesson or five on how to apply make up. It looks as if she’s using a paint roller sometimes. Don’t even get me started on her perfume. It’s actually quite befitting of her because it smells cheap and nasty. You can tell she’s coming 5 minutes before she enters the room.

A few months ago, she asked me if she could borrow my Daisy Dukes© along with a blouse to go with it. 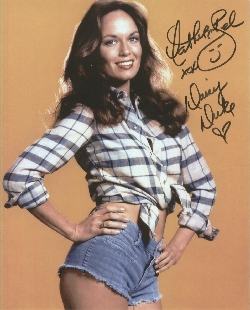 I know, I know, I know. I don’t know why, but I said yes. Believe me, I’m kicking myself for that one, let me tell ya. Anyhoo, several months went by and last week I decided to finally ask her for them back. She said no problem and she would bring it to me the following day. That day came and went and there were no Daisy Dukes© so I confronted her in the hallway. I said, “Tammy, you’ve had my Daisy Dukes© and top now for almost three months. I want them back.” I think she was a little embarrassed (I couldn’t really tell, she had so much makeup on her cheeks) and assured me that she would have them back to me the next day.

The next day came and when I went to my locker and there was a greasy-looking paper bag crumpled sitting there.

I opened up the bag and the top that I let “Tammy” borrow was, not only unwashed but, ripped and stretched out (Remember, 10 lbs into 5lb bag) but the horror of it all was the Daisy Dukes©. I had no knowledge of this prior to lending her my shorts but “Tammy” doesn’t like to wear underwear and what I saw was utterly disgusting. For lack of a better word, my short-shorts had a “Puss Stain” on them. I thought I was going to throw up. I immediately took the bag and walked right up to her, where everyone could see, and demanded and apology, an explanation, and a new outfit. She just stood there and said, “These things happen sometimes.” and tried to walk away. I then yelled out, “Yo, Taco Crotch! You forgot your dirty stained clothes.” and threw the paper bag containing the soiled garments at her. You can just imagine everyone around there started busting out laughing. They all started yelling, “Taco Crotch! Taco Crotch! Taco Crotch!” To be honest, I don’t even think she was embarrassed by it, although she has called out sick ever since the incident happened. She’s going to be quite surprised that one of the boys spray painted TACO CROTCH on her locker when she comes back. A little part of me feels ashamed for giving her that moniker, but another part feels that she got what she deserved. I mean, I just don’t understand how she can borrow someone’s clothes, and return them unwashed with feminine stains to boot. As of this letter, I’m still waiting for either new Daisy Dukes and a top to go with it or the cash difference of said outfit.

Dear Hating on the Taco Crotch

Ummmmmm. Was there a question in there?